Tips for placing a towel warmers
When renovating bathrooms and kitchens there is often a need for a towel warmer. A question that quickly arises in the planning stages is where to install one.

Bathroom towel warmers are most common, but kitchens, utility rooms and entrances are also becoming popular places to install them. It pays to think about the needs of the space.

If you need to dry a lot of clothes, you should choose a larger towel radiator, while the Tamar EO70 , for example, is a small electric towel dryers that require very little space. The curved tubes of the Tamar EO70 creates a stunning visual effect in your bathroom and provide plenty of space to hang towels. It is the perfect solution for tight spaces as it can be turned 180 degrees.

Placing the electric towel rail on the wall surface

Often people want to place the towel warmer within reach of a shower or bath. On a towel warmer that is permanently installed and connected, the frame may protrude into zone 1, but it must then be positioned so that the switch is in zone 2 or 3, see pictures. If a plug is used, the whole towel rail must be placed in at least zone 2. As the towel warmer is reversible, the switch should be placed facing away from the bath or shower. The minimum recommended dimension to surrounding confined areas to the side and upwards is approx. 100 mm. It is important to remember that the towel warmer is for hanging towels and must not be used as a handle. To avoid injury to small children, the towel rail should be positioned so that the lowest part is at least 600 mm above the floor surface. 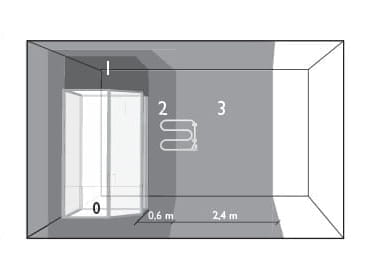